6 Copywriting Lessons from the NRA. (Yes, the NRA.)

by Chad Rucker - Get free updates of new posts here 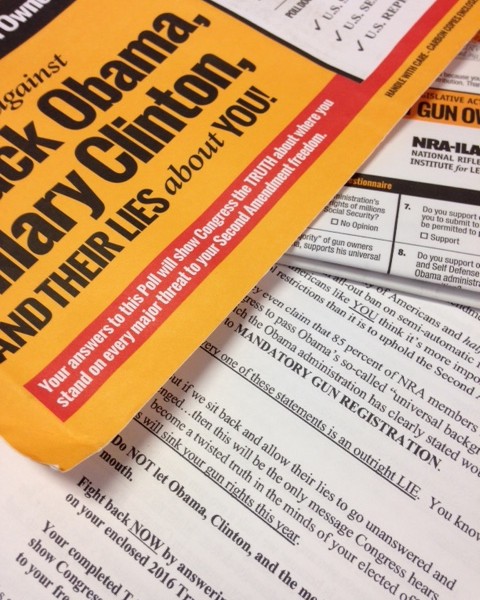 The National Rifle Association can teach a mastermind class on copywriting.

Confession: I own a few guns. Sue me.

However, I have great news: my gun ownership and NRA membership can help you, whether you appreciate the hog-stopping power of a .308 or you want to slap the rifles and pistols and suppressors out of my liberty-loving, red-white-and-blue-stained hands.  ‘Murica!

The NRA rocks at communication (some would say propaganda), but they rock particularly hard with direct mail, which is their main method for reaching their masses (I include letters, giveaways and propaganda-pieces-disguised-as-magazine-subscriptions). Really, these guys are brilliant, whether you hate them or not.

I have a recent direct mail piece that proves their brilliance as it pertains to persuasive copywriting.

Is it crass? You bet.

Is it effective? Damn right it is.

Here are few tips and tactics they use in their direct mail. Note: Will they revoke my membership for dissecting this direct mail piece? Quite possibly.

Are they watching me right now as I write this in Coffee Underground in downtown Greenville? Yes, yes they are. They just picked up my coffee and poured it over my head.

Now, onto the 6 lessons:

They use my name. This is basic marketing, of course, but you’d be surprised how many companies still use “Dear recipient” or “Chad Rucker or current home owner.” The “current home owner” moniker really presses a person’s buying button. It’s like when you’re at a party with your significant other and you have to introduce them to someone and you forgot that someone’s name. Um, hey, buddy!

2. They freak me the hell out 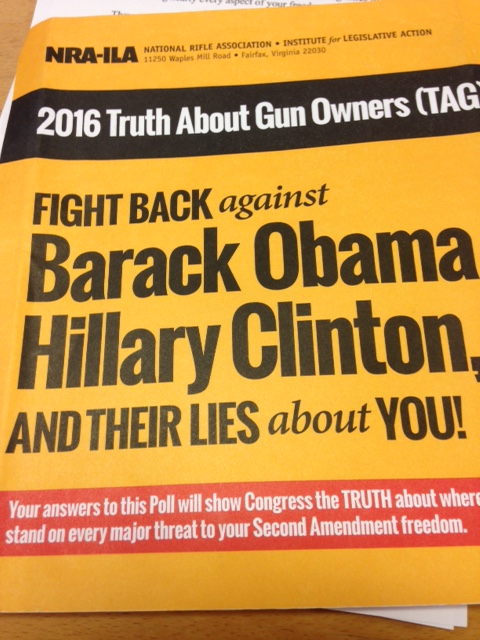 You should always know what freaks your customers or prospects the hell out. Maybe it’s downtime. Maybe it’s missing out on something. For gun owners, they are scared to death of Obama, Hillary and losing their guns. (I’m 100% for gun control, by the way, so ease up on the hate mail.)

The headline of the direct mail piece is this:

FIGHT BACK against Barack Obama, Hillary Clinton, AND THEIR LIES about YOU!

Wow! They’re telling lies about me? Holy smokes! Do I really believe this? Of course not, but you better believe I’m opening this direct mail piece.

I wouldn’t suggest that you base every communication piece upon fear, per se, but scaring the bejeezus out of your audience is not a bad (occasional) pursuit. Psychologically, it works wonders. Just don’t be so crass about it. Have some class, people.

Seriously, how is a gun owner NOT going to open this direct mail piece.

3. They use pithy sentences to build their story 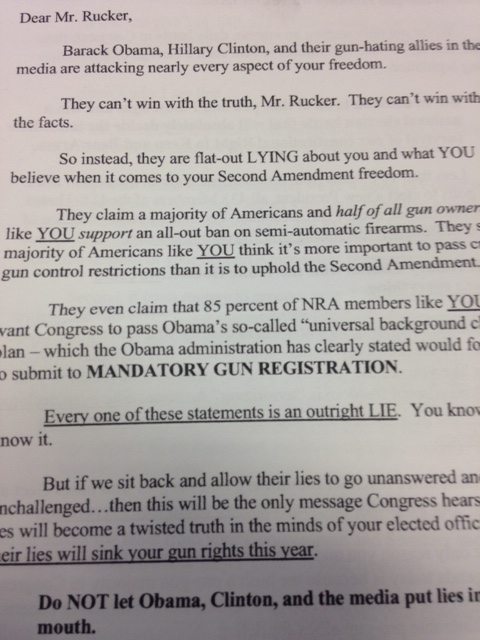 People hate to read, I get it, but people also love a compelling story that includes them. This direct mail piece knows that I’m going to scan the letter quickly, so they use short sentences and they drop nuggets like “MANDATORY GUN REGISTRATION” and “Fight back NOW” and “…we could lose everything.”

The NRA is basically shaking the reader by the shoulders and slapping them across the face. Not unlike the Three Stooges.

By all means, keep your sentences short. I’m not a fan of 1,000 underlined phrases and bold phrases and exclamation points, but it really depends upon the brand you’re representing. And hell, what do I know, I haven’t attracted $11.7 million in two months. Maybe I should try it sometime.

4. They give an instant, benefit-driven call-to-action

WANT MORE REVENUE? Do you want to rule the world and eat grapes from the hands of models? HERE’S HOW: Give your readers a clear, compelling call-to-action.

Alright, that’s enough drama. The NRA has a simple, “two minute” call to action in this direct mail piece: fill out a poll that the NRA will then send to my representatives. The NRA will amplify my voice, theoretically, and we will stop the enemy from, I guess, lying about us and stuff.

5. They utilize the Power of Commitment

If you haven’t read Robert Cialdini’s book “Influence: The Psychology of Persuasion” then hop on Amazon right now and get IT for pennies. It’s brilliant.

One of Cialdini’s principles of persuasion is “Commitment and Consistency.” Basically, he says that human beings have a deep need to be seen as consistent. Once we publically commit to something, we are more likely to follow through.

Back to the enclosed poll.

Do you think the NRA really wants me to fill out a poll and have my voice heard? Nope. They want my money. And by getting me to commit to a stance (the poll) they know that I will most likely commit to support “the cause” (give more money).

The “cause” is bigger than one person. The NRA wants to wrangle up all gun owners into one powerful tribe, fighting against a common enemy.

The direct mail piece comes with pre-paid postage, but check this out (look at the bottom of the image): 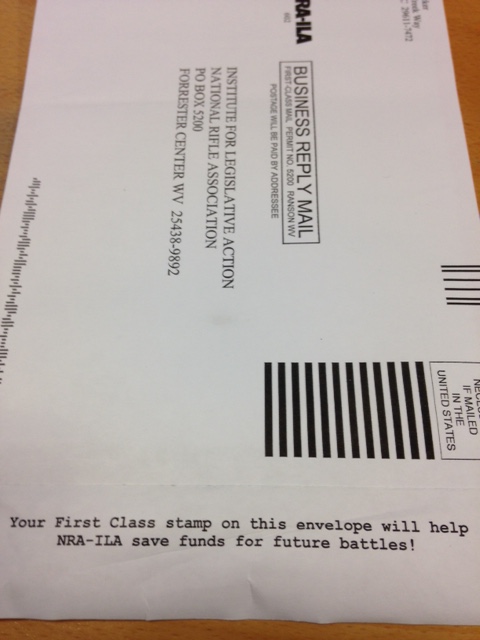 Bravo, NRA. They give you one powerful thought, even as you’re slipping in that check you just wrote: this battle will continue.

That, dear reader, is thoroughness. No stone left unturned.

So there you go. The NRA can fundraise with the best of them, particularly via direct mail. (And don’t knock direct mail, it’s making a comeback. Last year, it grew to a $45.7 billion market, per Target Marketing.)

The NRA could, of course, push comradery and togetherness, but they found that fear-based marketing works for them. And obviously it’s working. They raise an Uncle Scrooge amount of gold every year.

Where do you find these pain points?

Note: Your client will say they know the pain points of their customer. But if they’re coming to you for help, there’s either a gap in their knowledge or their marketing is abysmal. Do the homework on your own, whether you think the client is right or not, and start digging. Now I’m off to go play with my guns. 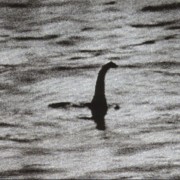 Chad has created copy, content and ideas for Verizon Wireless, Dunkin Donuts, Michelin and BMW, among others, for 15+ years. His copy sells, but it also wins stuff. He's got an Obie; Local, Regional & National Addys; and a closet full of ADchievement Awards. During the day, he's an associate creative director at Jackson. During the not-day, he hustles as Lochness for a bank, a whisky maker and whatever cool product you want to sell. 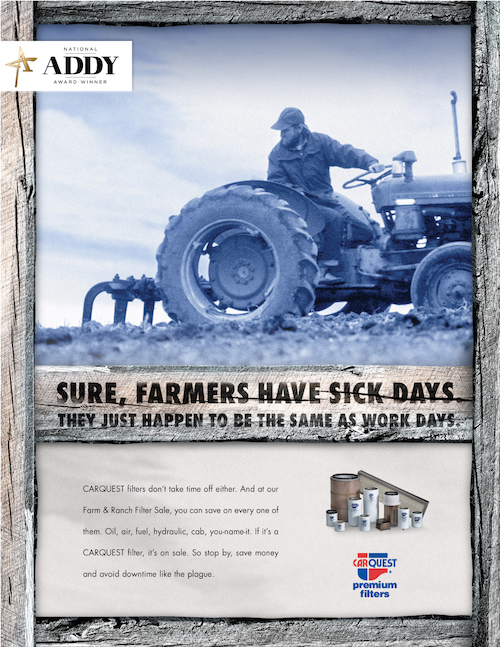